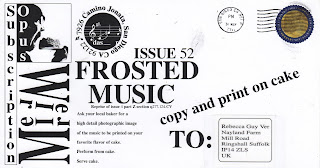 I haven't had mail from Jude in a while.  Jude hasn't had a portion of his quota of mail from me lately so I am doubly happy to get this rather delightful musical notion. Look at the top left stamp-like image of singing cake! It's such an oxymoron what he's trying to get me to, to take a perfectly good cake and get it printed onto so that I can sing over it.  In my opinion singing is even more suspect than blowing out candles when your talking about germs.  Look at the gusto that guy is singing with and then you analyse the hoops he wants me to jump through while singing. 'Using a stright stick the length of the keyboard sound all keys together'. REALLY? I won't even go into the fecal oral issue.

Still it's a great concept and a pretty score!  Thank you Jude, as ever. 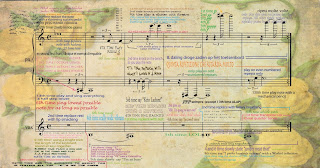 Posted by Rebecca at 1:01 PM No comments: 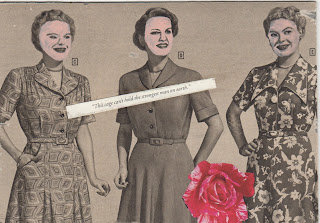 One never knows about these things but Mars Tokyo's collage with RESIST stamped on the reverse speaks to me of our beliefs about women, their place and their nature and the masks we wear. - All of which interests me!

In terms of the image, I remember buying vintage clothes and trying to squeeze my boyish hips and waist into these kinds of dresses ands feeling like a failure.  Now I wear colour and focus on the drama of costume!

Thank you Mars and hope you're enjoying your travels! 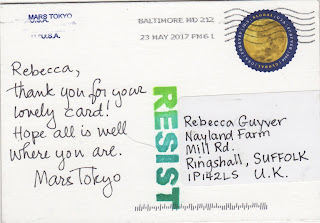 Posted by Rebecca at 5:03 AM No comments:

Enormous Fins in a world of sharks 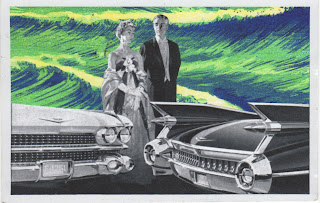 Not long ago I found a haul of romance magazines at a charity shop and repurposed pages to make some trash books. I sent those off to a few people and got stuff back, etc.  David and I are sending stuff back and forth.  He suggests that I repurpose it but I am an archiver. These ideas are important and even if the net gain and loss is nothing, at least we are sharing our stuff!

David's langauge reminds me of those romance magazines. Oh to be lost in one of those rather than to be in this odd twilight zone of politics. The president is back on building infrastructure.  David and I are building bridges of stuff across 'the pond', physically and woth our imaginations.

The thing about Mad Men and LA is you can park a car like that on the beach and the water really was that blue. Great stuff! 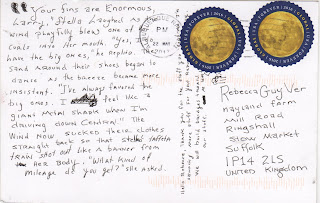 Posted by Rebecca at 2:33 PM No comments:

Since last night at 10:30 when I looked at my iPad before heading up to bed, all kinds of ugly images has been circulating. I use words like 'incident' with alarming frequency, these days.  London Bridge. Borough Market.  Places I go.

So, it is great to get this opportunity for optimism in Tina's mailing! I still have some add a pass stuff I keep meaning to get to, so it could be some time before these get returned, but I promise to think good thoughts while I make them! Thank you Tina, and I will be mailing the clown onto Mailart Martha tomorrow! 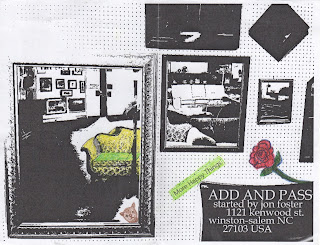 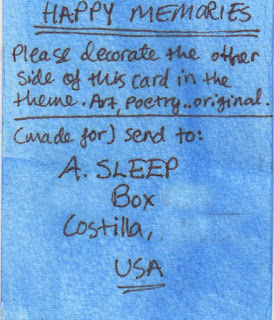 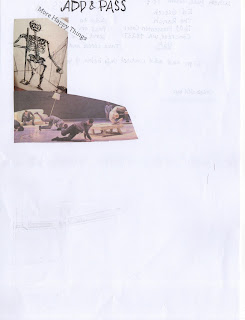 Poetry and dance of the stamps, Herman Kamphuis 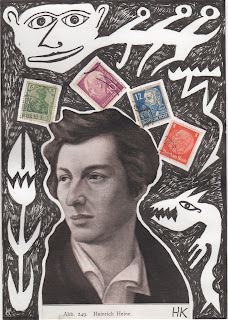 Always a delight to receive Herkalux' unique collage / drawings. Here on the one side he draws around the head of Heinrich Heine who I had to look up, (which is really quite appalling).  Heine was quite a guy! A poet, whose words were set to music by some of the great musicians: Schuman, Schubert, Brahms, Mendelssohn,  Strauss, Tchaikovsky, Wagner, etc…
A mistress stood by the sea
sighing long and anxiously.
She was so deeply stirred
By the setting sun

Herman's imagery has added to the story, did he Heine have visitations in the night? Was he a gardener? He has appeared on stamps. There is an echo of colours used later in the collection of this mailing.  Herman's compostion is sublime. And the way he puts together a mailing in wonderfully thoughtful. The stamps are dancing to the music. 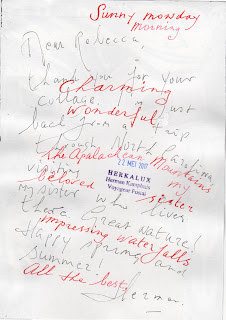 With caligraphy and two pens Herman creates his own poetry and shares the romantic style that Heine was famous for. 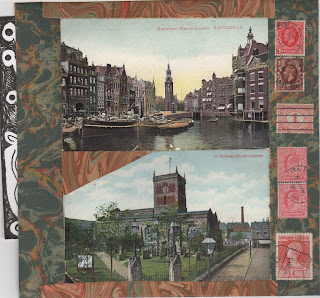 Leicester and Amsterdam have been twinned as have the children on the other side.  There is a dialogue going on. Fabulous as ever! 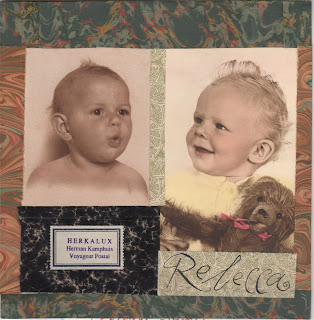 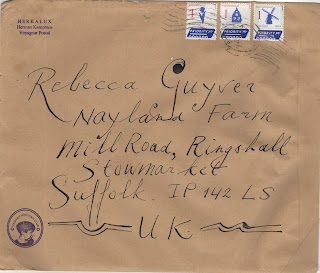 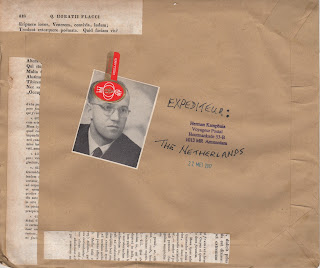 Ed's sharing his Americana with an English audience 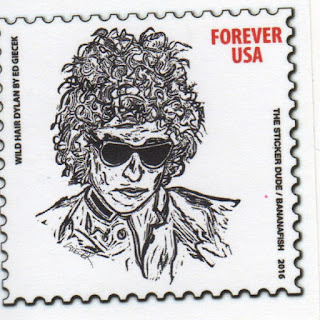 So in about two weeks I'll be hanging the mail art I received from my international mail art correspondents in my studio during the open studios weekends. Ed Giecek's ranch will be there. and what could be more American than Bob Dylan?… and a Sticker Dude/ Ed collaboration!  Brilliant!  If DVS reads this, this a contender for your hair mail art call of yore.

This cross section of fine stickers, stamps and angry eagle envelope, amazing musician postage stamps, trashpo and a little dose of political ire will be the perfect window onto the mail art world in Concrete Washington!  Thank you Ed. 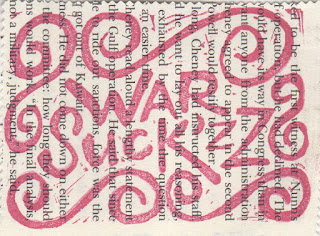 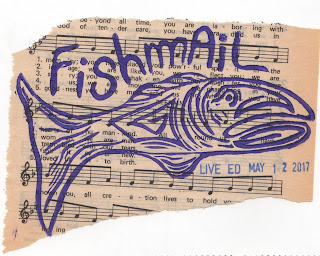 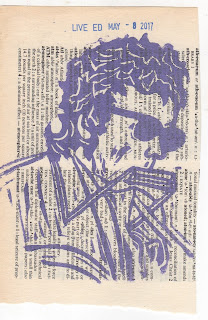 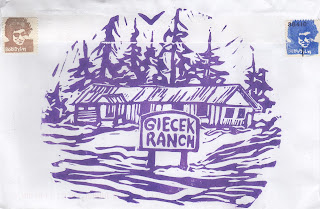 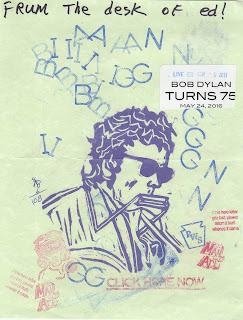 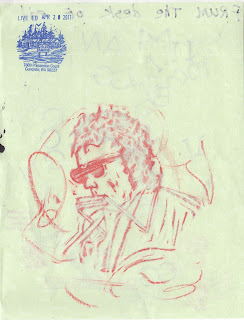 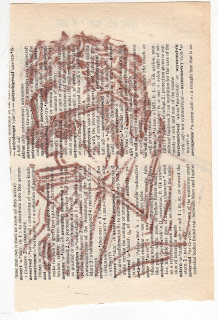 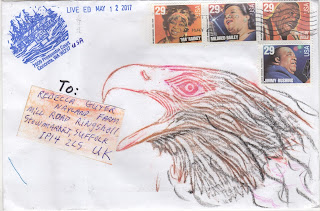 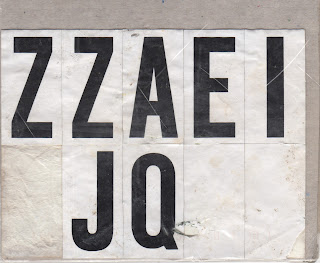 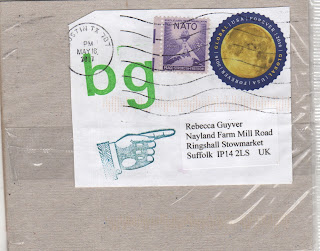 Humorous, minimalist, textual mail art bliss. BG can compose to create clear curiosity. This code/eye chart has me trying to decipher and also delighting in the strength of the ciphers. I can almost see Aljazeera.  Is this a comment on fake news? 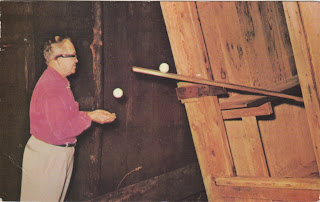 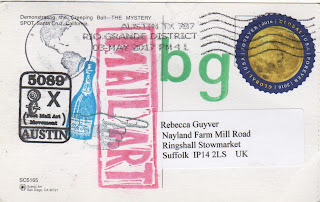 Following on from the fake news we have this astounding moment in history: the art of The Creeping Ball phenomena.  Would that we did things like this regularly these days. Now we're just on twitter. I love the way MAIL ART matches his shirt.