Longing to dance - the cornfield thing of dreams 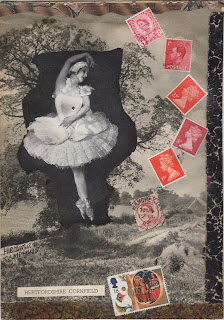 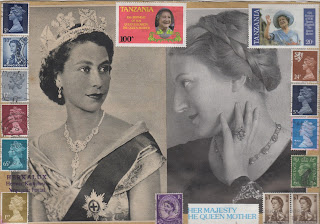 Nestled in a white collaged envelope (see below) Herman has made one of his signature envelope/folders. It is the thing of girls' dreams: a ballerina on point dances out of a magical cave under the spell of a Herfordshire cornfield with an oak tree. Stamps flitter alongside.  There is a majestic and magical quality to this scene. And another thing girls dream of is dressing in a crown, finding their visage on a stamp, hair braided around their head and diamonds. I don't know about you, but I am hooked on the Crown!

I agree, we do live in an angry world, and few characters elicit more anger that Maggie. At the moment I am pretty incensed by Moore and am hoping the vote down there goes the right way…

Herman has  a habit of sending me bits of dried plants.  These beautiful brittle leaves are this winter's offering. I always intend to dry flowers and leaves but even now the cherry leaves are beginning to rot into the stones before I find time to sweep them up or better yet, press them! 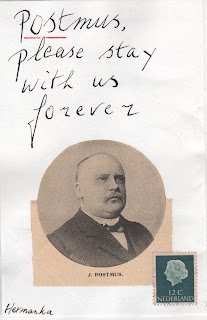 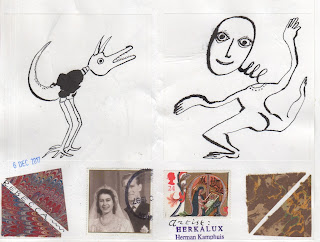 With his doodle creatures and characters, Herman reminds me of the joy in invention and gesture. It must be time to make more stamps! 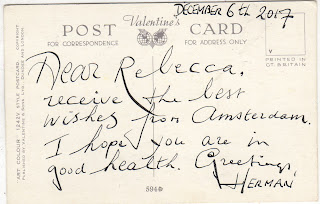 Mail art on its way in the next few days!  I am well and feeling optimistic for 2018! 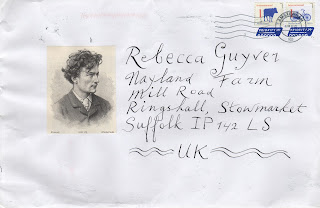 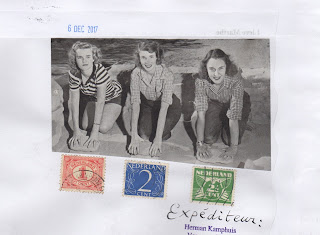 Posted by Rebecca at 1:13 PM No comments:

The Vivian girls are back… 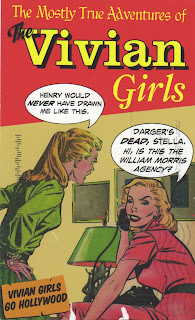 and there is an image problem. Vivian one seems to be intolerant of the way she's being portrayed while Vivian two can compartmentalize and channel her energy into the next task.

It's amazing how the Vivian girls seem to be the perfect metaphor for the two sides of Donald Trump - irate and stupidly collected.  A musical!  but I'm not convined they will be able to sing.

To learn more about the Vivian girls visit the comments on this page: http://thepostalleger.blogspot.co.uk/2017/09/return-of-vivian-girls-and-men-in-shades.html 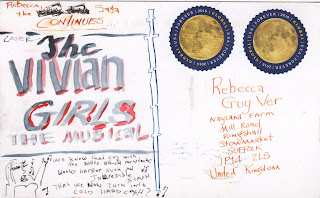 And don't forget to stroke the matt finish of this would be book cover.  Thank you David.
Posted by Rebecca at 12:41 PM 2 comments: 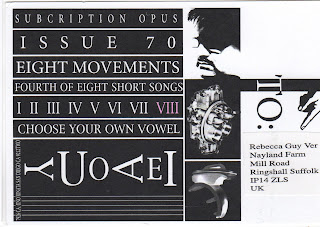 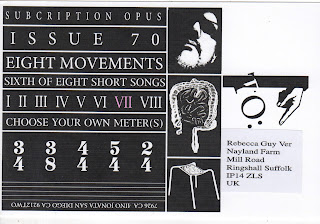 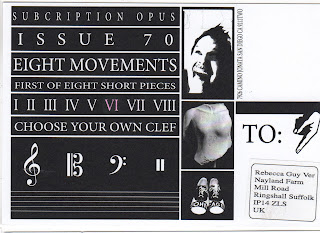 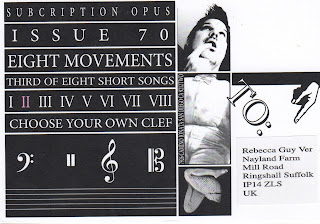 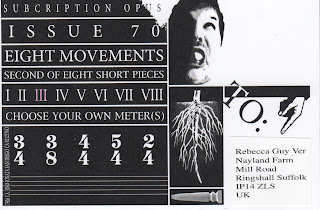 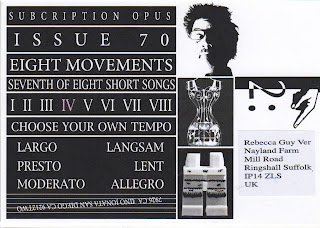 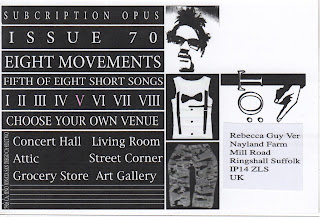 In the spirit of chaotic rearrangement (look carefully at the way Jude number and cross numbers his movements) my computer rearranged the postcards that I had input in a certain order, tying in with the roman numerals, for some reason, and randomised them. I suspect Jude will be pleased.  Or maybe he won't.  I can't begin to pretend to know EXACTLY what goes on in Jude's head, let alone his blesseed corpse.  I love the reconfigured bodies that point to the addressee. 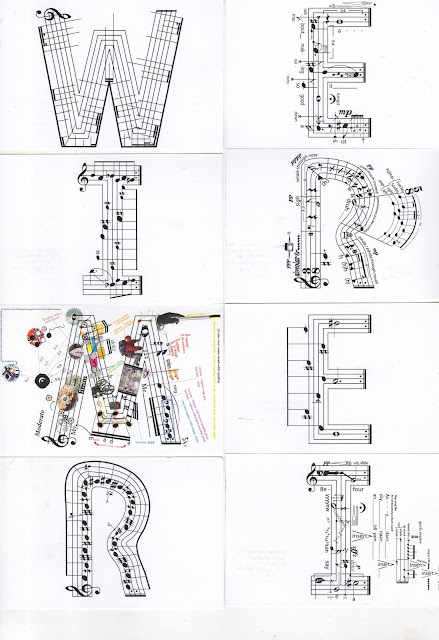 In a frankly literal way, I have scanned the reverse of the postcards together, as a unit so that they spell Jude's surname.  What I noticed that I have never noticed before was that even though it spells Weirmeir, my brain wanted to read Wiremire. But that's not the point.  The point is that Jude wants us to sing the letters of his name with a chosen clef, at  a personal tempo,  with a particular vowel and a meter tha works in a venue.

For this task you better read music not just acoss the page but around the page, pictographically, with all sorts of rules. Great stuff! 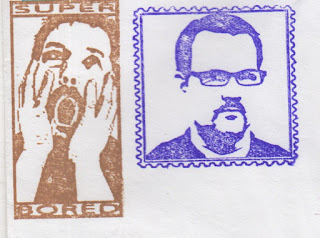 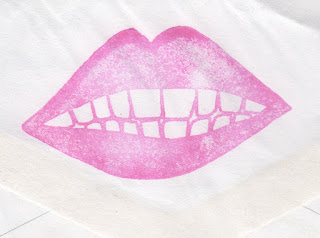 Cave Paintings from The Bowling Alley 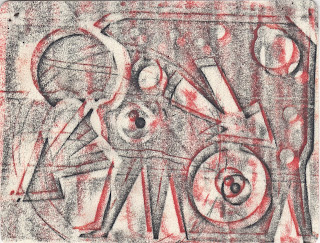 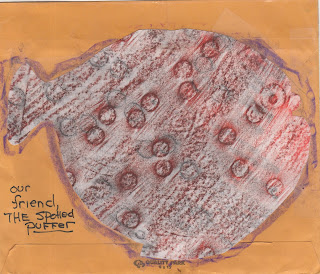 When we were on the Orkney Islands earlier this year, we went into a burial chamber called Maeshowe.  There we learned that 800 years before some Vikings sheltered in the chamber and to entertain themselves carved stories and words on the walls - viking graffiti.  These 'cave paintings' of David's strike me as marks of a man trapped in his studio, or kitchen, or 101 year old mother's house!  Brilliant obsessed artist stuff. and long live our friend the spotted puffer. 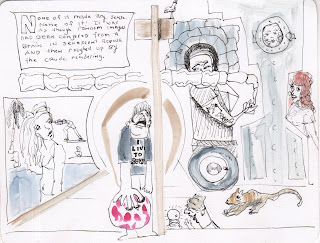 Meanwhiile, this wonderful rendering of the nightmare of intuitve thinking reminds me of walking through a Suffolk castle. Brits in inappropriate clothing, random shaped windows, keyholes, vertebrae like stones, portholes, damsels, rats, people determined to joust, or bowl, or something and of course mediums,  birds and slightly unhelpful singage. As for the crude rendering, nothing 800 years ago about these doodles. Many thanks for another brilliant mailing! 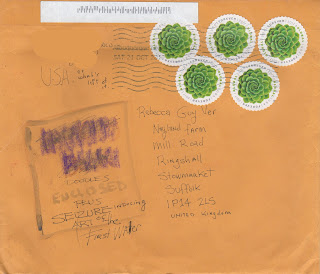