Herman sent me images of this mailing a few weeks ago, lamenting that I had never received it. In a scan he sent it was wonderful, but it was not nearly as gorgeous as it is to hold in my hand. The inside envelope (above) is absolutely glorious! Thank you, thank you. I love the romantic highly charged images juxtaposed with his patterned subtle collage.

When we thought the letter was lost, I tried to chivy Herman up, saying that I have had things take months, for no reason and that it would come.  As I typed those words, I had a nagging feeling that something from Herman was missing.

OK OK, I know I keep saying it and that I will sort it out tomorrow, but my life really is rather out of control, so it's hardly surprising that I stashed some mail art: TOFU and Mehrl Bennet (OOOPS) in my computer case and somewhere along the way forgot about it. I reckon it arrived on the day I left for Maine and my thinking was I'll have time there.  But I set myself some insane drawing challenge in Maine and I wanted to see people, swim, natter and in the end I failed and I forgot.

Then I got back and have been juggling the usual as well as going to London for the NEAC scholarship. But that is still no excuse and it suggests that I don't value the mail I receive. I promise, I do! …I found Herman's mail )and the other two pieces) while turning the studio upside down preparing for a workshop in a school. 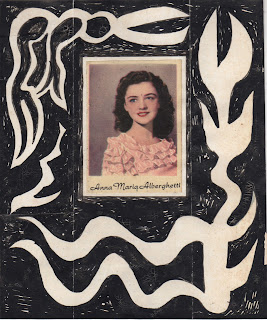 I love the way Herman can delight me with his imagery and send me straight to Wikipedia to discover an iconic figure I should know. Alberghetti was a child prodigy who won a Tony and appeared on Life Magazine twice. I am the woman who stands on a train next to someone every else recognises and is twittering about and doesn't notice and hasn't got a clue.

Alberghetti was from Pesaro.  I went to Pesaro when I first visited Europe in the mid 80s.  I stayed in a fancy hotel for a song,in a maid's room, eating proper meals in the dining room and swimming on the demarcated beach.  It was other-worldly. I was alone. I had my only uncomfortable hitch-hiking advance in Pesaro too. 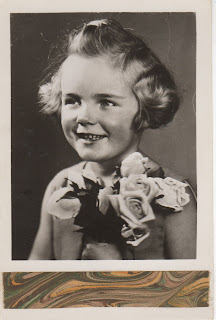 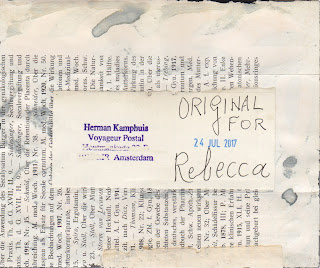 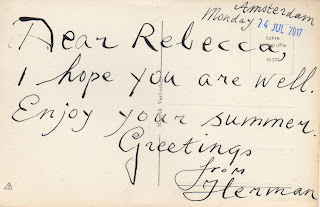 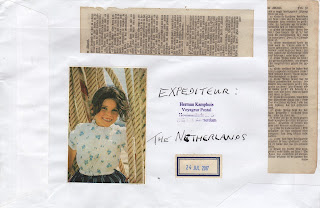 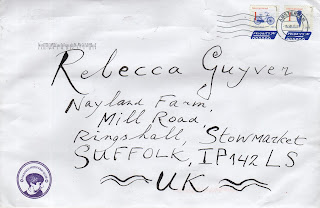 Herman, I did enjoy my summer but it went by in a rush. It was cold and dark this morning when I took Lyra (the lurcher) for her morning walk before driving half way across Suffolk to make journals with kids in a school.